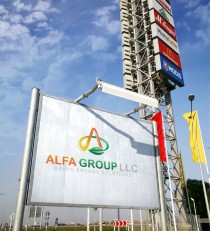 The process operates on a ZERO WASTE philosophy, defined as:

The recycling of all materials back into nature or the marketplace in a manner that protects human health and the environment.

The following is a description of ALFA Energy System™ process for transforming Municipal Solid Waste (MSW) and other waste materials into energy and useable by-products. The process can be broken down into four sub-systems: material handling, thermal transformation or plasma gasification, gas clean up, and steam and energy production. A flow diagram is shown at the end of this section.