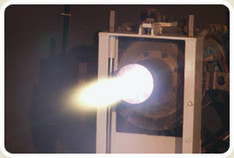 Plasma, often referred to as the “fourth state of matter”, is the term given to a gas that has become ionized. An ionized gas is one where the atoms of the gas have lost one or more electrons and have become electrically charged. The sun and lightning are examples of plasma in nature. Man made Plasma is formed by passing an electrical discharge though a gas such as air or oxygen. The interaction of the electric discharge and the process gas causes the temperature of the gas to increase significantly often exceeding 5,500°C (10,000°F), nearly as hot as the sun’s surface.

WPC’s plasma torches can be fed with process gases of widely varying chemical composition including air, oxygen, nitrogen, argon and others. This flexibility allows WPC to tailor the plasma torch system to best fit our customers’ needs. WPC’s plasma technology can increase the energy of the process gas to between two to ten times higher than conventional combustion.

What is Plasma Gasification

Gasification is a process that converts carbon-containing materials, such as coal, petroleum coke, municipal solid waste, or biomass, into a synthesis gas, (syngas), composed primarily of carbon monoxide and hydrogen.

Gasification occurs when a carbon-containing feedstock is exposed to elevated temperatures and/or pressures in the presence of controlled amounts of oxygen. Syngas can be used as a fuel to generate electricity or steam or it can be used as a basic chemical building block in the production of high value energy products such as diesel or electricity.

WPC’s plasma torch technology, which has been in development for over 30 years, is a high efficiency process heating device designed to operate with minimal maintenance in an industrial environment. The WPC plasma torch provides an inherent level of flexibility over combustion burners as it allows control over temperature, independent of fuel or oxygen throughput in the process. In general, the greater the temperature difference between the heat source and the material to be heated, the faster it can be processed.

The benefits of WPC plasma torches include:

·             Power input can be quickly adjusted to match process requirements.